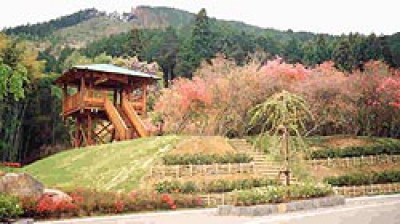 A part of the Shobo-ji Temple site on a small hill has a lot of 4 to 5 meter-tall torch azalea bushes growing wild for more than 300 years. When they were at full bloom from late April to early May, the azalea blossoms used to cover the whole hill. It is said that these bushes were planted by a monk at Shobo-ji Temple, Tetsuzenmumi, who died on January 8th, 1740. The bushes are designated as a City's Cultural Property.
There are many other plants in the park, such as weeping cherry trees, calami, dogwoods and silky wisteria. There are also a playground, an observatory, gazebos, benches and restrooms.
There have been less and less azalea blossoms lately, but with the support and care by the local municipal, the quality of soil got improved, and they are hoping to see the full bloom of the azaleas again.
On Buddha's birthday on April 8th, sake and hydrangea tea are served, and the paintings of Buddha's death and Hell, which belong to Shobo-ji Temple, are displayed.